Christopher "Kit" Carson was a frontiersman, trapper, explorer, Indian fighter, and brigadier general. He was the subject of 19th-century American hero worship, and the subject of cheap, popular books called "dime novels".

At age 16, Carson left home in Missouri. He became a mountain man and trapper. He traveled through unexplored areas in the western United States. He trapped between 1829 and 1841.

In 1841, men's fashiohs changed. Men wanted silk hats instead of beaver hats. The trappers had nearly depleted the beaver in North America. Carson decided it was time to do something else.

In 1842, he guided Army officer John Charles Frémont to Wyoming. He guided Frémont to other parts of the West. Frémont's reports to the government made Carson famous. He became the subject of cheap, popular books called dime novels. 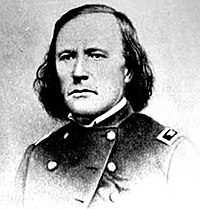 In 1846, Carson took a small part in the Mexican-American War. He rescued American troops trapped by Mexicans near the town of San Pasqual, California. This event deepened his fame. He was made a colonel in the Union Army. He fought Confederates in New Mexico during the American Civil War.

Carson was made a brigadier general in 1865. He took command of Fort Garland in Colorado in 1866. In 1867, he resigned from the Army because of illness. He died of heart disease in 1868. He is buried in Taos, New Mexico.