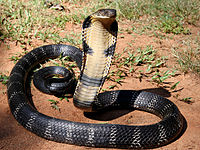 The king cobra (scientific name : Ophiophagus hannah) is a large venomous snake of southeastern Asian rainforests. The snake can grow from 12 to 18 feet, and weigh from 12 to 20 lbs. They are colored olive, brown, or black, with a cream or pale yellow underbelly.

The snake's scientific name means "snake eater". The king cobra is a carnivore. It eats mainly other snakes, but will eat lizards, some frogs, and sometimes small mammals. Its enemies are humans, mongooses, and birds of prey. It is not a true cobra (Naja), but occupies its own genus.

Distribution of the king cobra

The king cobra mates once a year in January and builds its nest in April. The snake lays 18-50 eggs. The eggs hatch in 70-77 days, and the young are 12 to 25 in. in length. Males do not help to raise the young. The king cobra is the only snake that guards its nest. Cobras live about 20 years, and are loners.

When threatened, the king cobra rises up to one third of its length and may sway. It will also sometimes spit in its prey's eyes. This stings, and will kill rapidly if it gets into the blood stream. The poison paralyzes the nervous system of its prey, which is often larger than itself.