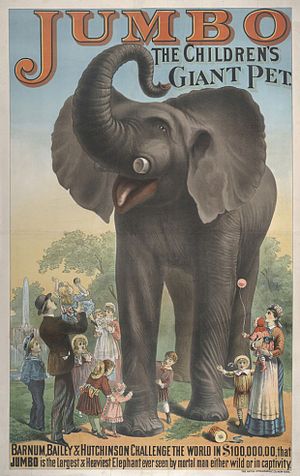 Jumbo poster from the 19th century

Jumbo was the first African elephant to reach modern Europe alive and the first international animal superstar. He was born in eastern Africa about 1860, and captured there by Arabian hunters in early 1862. He was sold first to a traveling zoo in Germany, then to the Jardin des Plantes in Paris. He was traded to the London Zoological Gardens for a rhinoceros.

Jumbo lived in the London Zoo about 16 years. He gave rides to children in a saddle on his back called a howdah. He was remarkably gentle, patient, and friendly. He was the biggest elephant in captivity. American showman P. T. Barnum wanted this huge elephant in his circus. He bought Jumbo in 1882. The elephant's first appearance in the United States took place on Easter Sunday 1882 at Madison Square Garden in New York City. He toured with Barnum's circus for three years and had his own colorful railroad car. In September 1885, he was killed in a railroad accident in Canada.

Jumbo and his keeper Matthew "Scotty" Scott In America, June 1882

Jumbo attracted as much attention after his death as he did in life. His hide was stuffed and his bones preserved. They were displayed first with Barnum's circus and then with museums. His hide was destroyed in a fire at Tufts University in 1975. His skeleton was displayed for many years in the American Museum of Natural History in New York City. As time passed, children forgot who Jumbo was. His skeleton was put away.

Jumbo's sale in 1882 created public outrage in Great Britain. It drew the attention of people around the world. "Jumbomania", a fad for all things Jumbo, was born and the civilized world was flooded with Jumbo-related souvenirs.

Jumbo's death was met with sorrow worldwide. He had brought awe and gladness into the lives of many people around the world. His greatest legacy is his name. It has entered the English language to mean anything extraordinarily large.