From Vikidia, the encyclopedia for 8 to 13-year-old children that everybody can make better
(Redirected from Jesus Christ)
Jump to: navigation, search 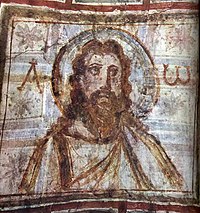 Jesus (also Jesus Christ or Jesus of Nazareth) is the central figure of Christianity. He was born sometime between 7 and 4 BC in Bethlehem, Judea. He died sometime between 30 and 34 AD in Jerusalem. He was a jew from Galilee, which was a part of the Roman Empire at the time of his birth.

The name Jesus came from the Aramaic name "Yeshua", meaning "God is salvation (or deliverance)" in English. Yeshua was a popular name of the time.

Jesus is also called "Jesus Christ" or "Christ". The word Christ comes from the Greek word christos It means "the one marked on the head with oil" or "the anointed one". In Jesus' country and time, anointing was done to show that a person was chosen by God to be a king or a leader (as King Saul or King David).

Jesus is also called Messiah, which comes from the Hebrew term Moshiach and means "the anointed one".

Stories about Jesus's life have been recorded in the Gospels (or Good news). They are said written by Matthew, Mark, Luke and John. Gospels had been written many decades after the death of Jesus (circa 60-90 C.E.) in different Christian communities. They tell a little about Jesus's birth and mostly about his teaching and ministry when he was adult. They tell his death by crucifixion and they said that Jesus resuscitated (return from death) three days after.

Several romanized Jewish and Roman historians, all born after Jesus was crucified, such as Flavius Josephus, Tacitus, Pliny the Younger and Suetonius mention in their writings the execution of Jesus or problems between the Roman government and the first Christians.

Jesus in other religions[edit | edit source]

Even though Jesus was a Jew and his teaching came out of the Jewish religion, most Jewish people do not believe that Jesus was the Messiah that is promised in the Jewish Scriptures (or Old testament). 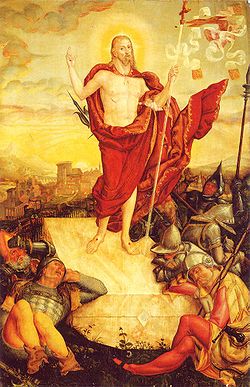 The Resurrection. By Lucas Cranach the Younger. 1558