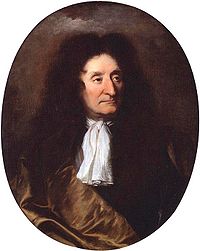 Jean de La Fontaine was a French poet and fabulist (writer of fables). He was born on 8 July 1621 at Château-Thierry, Champagne, France, and died on 13 April 1695 at Neuilly-sur-Seine, France. His family was well born, but not of the nobility.

His literary career began with short poems. In 1668, the first six volumes of his Fables were published. He was elected to the Académie française in 1683. Upon the 300th anniversary of his birth, asteroid 5780 was named Lafontaine in his honor.After a long period of royal suspicion, he was admitted to the French Academy and his reputation in France has never faded since. Evidence of this is found in the many pictures and statues of the writer, as well as later depictions on medals, coins and postage stamps