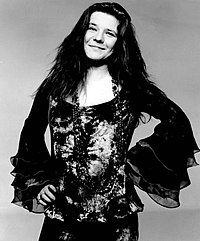 Joplin was lead singer for Big Brother and the Holding Company, and other bands. She was inducted into the Rock and Roll Hall of Fame in 1995. Her only #1 single was "Me and Bobby McGee".