The jackal looks like a simple domestic dog, but it is a skilled predator, has sharp and curved canines that allow him to eat small prey; it has long legs to run fast, commonly his coat is yellowish-brown with a black strip on his back.

The scientific name of the jackal is "Canis adustus", belonging to the genus of "Canis" and to the class of mammals.

There are two other types of jackal: the "canis aureus": the golden jackal, and the "Canis mesomelas": the black-backed jackal

The lateral striped jackal, the most common one, lives in Central and Southern Africa. The jackal is omnivorous, eats 54% of meat and the rest vegetables: young gazelles, rodents, hares, birds , reptiles, frogs, fish, insects and fruit.

Jackals hunt in packs. The pack is formed by a pair of jackals that commands, and other jackals who have joined the herd to capture preys more easily.

The common jackal lives in Central and Southern Africa.

The Black-backed jackal lives in Southern Africa and eastern coast of Kenya, Somalia, and Ethiopia.

Evolution starts from the black-backed jackal, which evolves into the lateral striped jackal; after then comes African the wild dog, after him comes the Dhole, after the Dhole comes the Ethiopian wolf; his face looks very much like the wolf.

Then there is the gray wolf, a very common animal even today, around in every part of the world, and finally comes the dog, the most common pet.

In the past Jews and Christians saw the jackal as an evil animal instead, for Egyptians it was a positive animal because Anubis, the jackal-headed god, was the god of the afterlife.

"And the man met the dog" is the title of the book where the nature and evolution of the dog is told, this book also talks about the jackal,

the book is written in Italian.

Anubi, the Egyptian god of death.

Accompany the dead in the underworld up to the balance of the heart, takes the heart of the dead and weighs it with a feather, if the heart is less heavy than the feather the dead more go to heaven, but if it is heavier goes to hell. 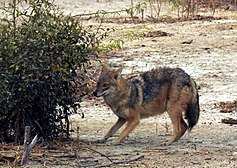 The jackal commonly has the yellow coat with a black stripe on the back.