Albert Namatjira, an Aboriginal artist, outside Government House in Sydney.

An aboriginal women with traditional dressing-up.

Indigenous Australians or Australian Aborigines are thought to have arrived in Australia from the Asian Continent from 60,000 to 40,000 years ago. They may have arrived by boat or across land bridges no longer existent. Aborigines were the first people to live on the Australian continent. Their traditional territory extends over mainland Australia and Tasmania. It is thought that at the time of European settlement on the east coast of Australia in 1788, there were about 1 million Aboriginal inhabitants. Nowadays there are only about 200,000 Australian Aborigines who maintain a traditional lifestyle.

The term "aborigine" is a word of broad use that simply means "originating at that place". The word can be used for any person in the world who lives in the country that their ancestors came from. However, the word has come to be used in Australia with a capital letter - "Aborigine" - to signify an indigenous Australian person.

A view of the township of Oenpelli, an Aboriginal community in the Northern Territory of Australia.

Traditionally, Australian Aborigines have a "subsistence economy", meaning that they generally collected only enough food for their needs, and did not buy and sell. Traditionally, they were what is known as a hunter-gatherer society, not farmers. All their food was collected from the land, rather than planted and tended as crops. In general, the men hunted, while women collected fruit, vegetables and grain. A wide variety of edible plants are native to Australia, many of which are not found in other countries. 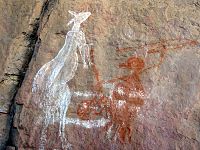 Ancient Aboriginal drawing of a kangaroo and hunter.

Before the arrival of Europeans in 1788, the main source of meat were kangaroos and wallabies, birds and fish. Kangaroos breed in grasslands, and the Aboriginal people maintained some grassland areas by regularly burning off the dry grass, and any little trees that might have shot up. Aborigines also ate snakes, lizard and a variety of insects and grubs, the best known being "witchetty grubs" which are large and fat and are said to taste like peanut butter when roasted.

The most common hunting weapons were spears which were often a long thin piece of wood simply sharpened to a point at one end. Heavier and more elaborate spears sometimes had a point of stone fixed at the end with gum from a tree, string or leather. A fishing spear was generally split so that it had several points. Sometimes, when hunting in a large open plain, a man might use a spear-launcher called a "woomera", in order to throw a spear further. Wooden clubs were also used to kill animals. The best known Aboriginal implement is the boomerang, or throwing stick, some of which are designed to returned to the thrower, if properly thrown. These are made from curved, flat wood and have a variety of uses, including hunting birds. Some boomerangs, particularly returning boomerangs, were made for pleasure.

Australia is a dry country, and even those parts that generally get good rain, are subject to drought. For this reason, the ability to find water, where no flowing stream or river is available has always been important for the survival of the Aboriginal people. This is essential particularly when a family or tribe is on the move. Aboriginal people are expert in reading the signs given by birds and animals, and observing their movements in order to locate water holes.

Although Aboriginal Australians did not use money before the arrival of Europeans, it is clear that they traded. Two commodities were important, and trade routes used by people who travelled across the country have been traced. These commodities are stone and ochre. Stone, particularly quartzite, was used to make stone cutting tools and the heads of spears. The stones were shaped by chipping and flaking pieces off to achieve the right shape. In parts of the country where there were hard flat river stones, these could be shaped into axe heads by grinding them against other stone to make an edge. Ochre is iron oxide, which comes in a variety of colours, white, yellow, red and brown. It can be mixed with liquid to form a clay-like paint. It is used both for painting pictures on the walls of caves, and as body paint for ceremonies.

A tour leader at Uluru, doing a public demonstration.

When the first European settlers arrived in Australia in the late 1700s, there were 250 clans which spoke over more than 600 different dialects. The tribes sometimes met for festivities.

Aboriginal people generally identify themselves as belonging to a particular Aboriginal race, of which the most common are:

Aborigines used to believe in the period they call Dreamtime. They believe it was a time when some ancestral spirits called Wondjina, made rocks, plants, animals, and man. Would talk to them in their dreams, the Aborigines had a master priest in every Village that could tell them what their dreams meant and if they were good or bad.

Ancient Aboriginal drawing of a Thylacine on a rock.

The cave paintings they did showed the history of the creation and legends of the People of the Dreams, that's the way they called themselves.

Aboriginal artists used brushes made by pieces of wood. To made them, they chewed them until they frayed the ends. There were also ones made by bristles of animals or feathers tied to a stick. Sometimes the artist extended the color with his or her fingers. As pencils they used coal or clay.

The X ray style is the most famous way of aboriginal painting. This style consists to paint the animals or living thing with the external part or the body and also the internal organs or the skeleton. Every figure was represented with lots of details. They were experts in anatomy!

The most known of Aboriginal musical instruments is the didgeridoo, or yidaki, traditionally played by men of Arnhem Land and the Kimberley region in northern Australia. The didgeridoo is a eucalyptus branch emptied by termites. It's used as a wind instrument but also as a way of communicating in long distances. Probably is the oldest instrument in the world. This instrument is famous worldwide, and has lots of popularity among traditional musicians or the ones who play music like Rock, Pop and Jazz.

The rhythmic sticks are made are from wood and you beat them against each other to get the rhythm of their dances. They are decorated with the totems of the tribe. (The totems can be plants, animals or rocks and it's the symbol to identify each tribe).

Aborigines didn't write, so they didn't have a writing structure. Their maps were songs or drawings. Their songs describe the landscape as it is and because of them they can find the way to their places. That's because they call to their paths the singing tracks and this songs are taught from generation to generation.

Also, they draw landscape to indicate for example water or paths.

What did they wear[edit | edit source]

They wore a loincloth and not much more. They had normally jewellery and they had the body painted. In present times they are all dressed like everybody in their country except the ones who didn't change the primitive way of living their ancestor had.

What is left of them today?[edit | edit source]

Today we have lots of thing they left to us today like instruments or tools very famous. Aborigines also taught us an important lesson and that is to not discriminate against others because of their color of skin, culture or traditions. The aborigines, fed up with all the discrimination and with the kidnap of many aboriginal children between 1910 and 1970, and they demanded an apology of the government. The official ceremony took place the 13 of February of 2008 in Canberra.