A Indian peafowl is a bird of the Phasianidae family. It is a relative of the pheasant. It originally lives in Pakistan and India. It is a domestic fowl in many other parts of the world, and sometime a feral animal.

The male Peafowl can have up to 150 brightly coloured feathers on its tail coverts.

For centuries peafowls have been admired for their beauty and hunted for their meat. Recently peacocks have become more popular in parks and gardens. 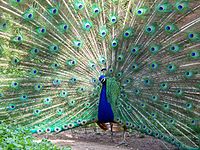 The front of a peacock

The back of a peacock

They like to eat any kind of green shoots (flowers, veggies, grass etc.) as well as wheat, cracked corn or wild game feed. They can handle freezing temperatures as long as they have a dry perch that is out of the wind and weather. Dry dog and cat chows make excellent winter feed for peafowl, who are omnivores, eating insects, small snakes, lizards, grain, as well as many varieties of greens. They are particularly fond of petunias and similar pot plants, leaving nothing but a small green circle where the stem once emerged from the soil. The birds will learn to come to a specific place at specific times of day to be fed, and a regular light feeding during summer adapts them to coming to the feeding place in winter.

The peafowl is native to southeast Asia including India, but they were brought to Europe long ago. They can acclimatize to colder areas.

The very long, elegant and colorful plumage of the male birds, peacocks, is grown over the winter months so that they are ready for the early spring mating season, during which each male establishes a territory and calls the females to come admire his dance, a rustling of tail quills which hold up the fanned back plumes (= tail feathers) as he stamps and turns. The summoning call is loud, repeated, happens sometimes at night, and sounds, to some people, like a woman screaming. Often it is tri-syllabic, mi-fa-sol. Once the mating season is over, the tail feathers are naturally shed.

The peacock's display is a classic example of sexual selection.[1]

The female birds, peahens, are soft brown and gray with white chests and bellies and some light green on the neck, the colors blending so well with weeds and grasses that when the female is nesting on the ground, she is almost invisible.

The hen teaches her chicks what to eat by putting her beak down at a chosen bug, grain, seed, or leaf and making a throaty "grock" sound. The chick put its beak against the mother's, follows the beak to the tip, and eats whatever it points at. The chicks can learn what to eat from a hen of another species, but, unlike baby chickens, peachicks need to be shown what to eat. Chicks hatched in a hatchery can starve to death if there is no hen to teach them what to eat.

In addition to the "eat this" sound, the female has a particular call for a missing chick, a "where are you," "hoo-hah" call, two toned, high then low, mi-do, mi-do. When a chick is missing, this call can go on for hours.

She lays from two to six eggs in the spring time and, once all are laid, sits on the eggs for about thirty days to hatch them, leaving the nest once or twice a day to feed and drink. Often the female will utter a shrieked "trouble" call, a quickly repeated "cuk, cuk, cuk, cuk" when she leaves the nest, to attract predators away from it.

Once the chicks are hatched, the mother leads them away from the broken eggs, as the smell of the eggs attracts predators. They are able to flutter a little within hours, and in a few days can fly up into sheltering trees by going first to lower branches and working their way higher, preferring high, protected branches. The chicks roost on either side of the peahen, and she extends her wings to cover them during the night, thus protecting them from rain, hail, and visits from owls. They begin to grow their "crowns" when they are only a few weeks old and it takes about a year for them to reach full size, though it may take three years to reach breeding age. Both males and females are hatched with the same plumage; nine to twelve months after hatching, the males' necks begin to turn peacock blue, and their splendid plumage takes about four years to reach full size.