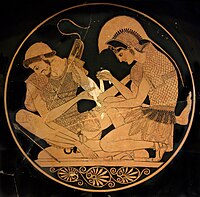 Achilles tends the wounded Patroclus in a scene from Iliad

Iliad is an epic poem about the Trojan War. It is said to have been written by Homer. It was written around the eighth century BC. The poem tells of a quarrel between the Greek warrior, Achilles, and the leader of the Greek forces, Agamemnon, over a slave girl. Although the poem is set during a few weeks in the last year of the ten-year war, the entire story of the Trojan War is told.