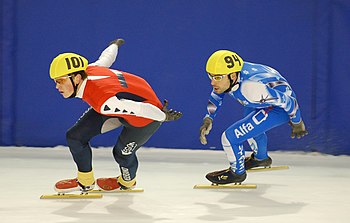 Ice skates are boots with blades attached to the bottom. They are used in ice skating to propel oneself across ice surfaces.

It allows a person to move adeptly across a sheet of ice. A skater can glide quickly and stop and start quickly because of the design of the blade. A person can also turn in a controlled way when on the ice. A fast skater can go much faster than a fast runner. World record times for speed skating are about twice as fast as world record times for running the same distance.

The oldest pair of skates known date back to about 3000 B.C., found in a lake in Switzerland. The skates were made from the leg bone of a horse, holes were bored at each end of the bone and leather straps were used to tie the skates to the feet.

The Dutch began using wooden skates with iron runners in the 14th century. They used poles with these skates to push themselves forward. Later, they added a narrow metal blade that allowed the skater to push off with his feet and still glide.

In order to make skates with a metal blade people first had to have the ability to smelt (purify) and work metals like iron. Rigid shoes also make for better skates.

The steel ice skate was invented in 1867 by John Forbes, in Dartmouth, Nova Scotia.

Modern skating boots are usually rigid to support the foot and ankle. Traditionally, the boots are made of leather, but in recent years, boots made of synthetic materials have become more popular. 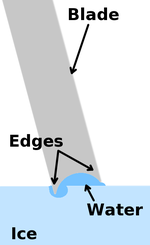 This is a cross-section of the blade of an ice skate on the surface of the ice. Tilting the blade causes the skate to turn.

Although ice is solid, as long as temperatures are above −20°C (−4°F) there is always a very thin layer of water on the surface that makes it slippery. Extra melted water from the rubbing between the blade and the ice vastly reduces the friction allowing the skater to glide across the ice with little effort.

How dangerous is it?[edit | edit source]

As with all sports, there are risks with skating. Ligaments can be torn just through skating too hard and bones can be broken through falling. A person can get a nasty cut (which can be lethal if it ruptures or severs a major artery or vein) if they are skated over by another person on the rink. The easiest way to prevent these things are to skate carefully and wear proper protective equipment.

Skates provide mainly fun and entertainment in the winter time. There are a number of sports that are played on ice skates including ice hockey, speed skating, and figure skating. These are some of the most popular sports in the Winter Olympics.

Figure skates are used in the sport of figure skating. They have flat blades with large, jagged toe picks on the front, which are used for jumping. Figure skating boots are typically made of several layers of leather and are very stiff to provide ankle support for jumps.

Hockey skates are used for playing the game of ice hockey. The boot is generally made of moulded plastic, leather (often synthetic), and ballistic nylon. The blade is curved at both ends.

A pair of racing skates; note the length of the blade.

Racing skates, also known as speed skates, have long blades and are used for speed skating. A clap skate (or clapper skate) is a type of skate where the shoe is connected to the blade using a hinge.

A touring skate, shown both separate from and attached to a boot.

Touring skates (or Nordic skates) are long blades that can be attached to hiking or cross-country ski boots and are used for tour skating or long distance skating on natural ice.