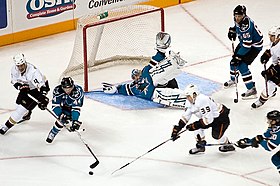 An ice hockey game (the San Jose Sharks, in Blue, and the Anaheim Ducks in white.)

Ice hockey is a sport played on ice. The object of the game is to shoot a hard rubber hockey puck into the opponents' net to score points. It is a team sport in which six players from each team are active on the ice at a time. Five of them are skaters and one is a goaltender who protects the net and attempts to keep the other team from scoring. The National Hockey League is the most important league in the United States and Canada.