From Vikidia, the encyclopedia for 8 to 13-year-old children that everybody can make better
(Redirected from Hitler)
Jump to: navigation, search 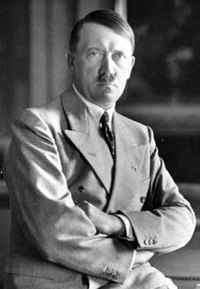 Hitler was born into a family of six in Austria (not Germany, like some people think). Hitler's father later died in 1903, which caused him to fail his High School Exams. He left school in 1905 with no qualifications. Hitler became interested in Antisemitism. This is the belief that Jews are not as important as other people. This caused him to hate Jews for the rest of his life, which eventually brought about the Holocaust. In 1913, Austria wanted all young Austrian men to join the army. Hitler left for Germany because he did not like the Austrian army.

After World War I, Hitler went back to Munich. He went to the funeral march of Kurt Eisner. In 1919, Hitler joined the German Workers' Party. Two years later, he became the leader of the party which he later renamed the Nazi party.

In 1925, Hitler wrote a book called Mein Kampf (or My Struggle in English)

Hitler's actions, teachings, and beliefs that Jewish people were less important than others, lead to the deaths of millions of Jewish people in World War II in concentration camps, while others were attacked and murdered. This was called the Holocaust. Hitler later killed himself after the allies (USA, UK and Canada) pushed the German forces back after D-Day.