The history of Afghanistan spans over about 5,000 years, and can be traced back to 3000 and 2000 BCE, when the first urbanized cultures appeared in the region.

Human habitation in Afghanistan started in the Middle Paleolithic Era. In 3000 BCE, cities appeared around the Indus Valley and in Bactria.

The country then endured a number of military invasions throughout Antiquity and the Middle-Ages, by the Persian Empire, then by Alexander the Great, the Mauryas, Muslim or Mongols. It was separated into many small, and sometimes unstable kingdoms and empires, before the country became independent in 1747.

It then entered various wars with the British, Soviet or Western countries such as the United States. These invasions brought in many different cultures, religions or languages, including Greek culture, Buddhism, Hinduism, Muslim culture and Islam, Persian culture or English language.

The country being along the Silk Road, it was easily connected to other Asian, Middle-East or European cultures.

The country has also been very important as it has served as an economic, political and commercial centre, for China, India, Iran, Mesopotamia or Europe.

5000 year-old pot excavated from the Burzahom archaeological site, with a painting of a goat with long horns.[1]

According to archaeologists, humans have settled in Afghanistan since 50,000 years. They started off as hunter-gatherers, but then started farming and irrigating land. These regions are among the earliest known to have developed agriculture and farming communities. Villages and cities also started appearing in Afghanistan, dating from the Megalithic or Neolithic times, such as the Burzahom site.

In the very northern parts of the country, ruins of ancient cities belonging to the Indus Valley Civilisation have been found, such as the Shortugai or the Mundigak sites, dating back from around 5000 to 2000 BC (bronze age). In these sites, clay statues and artifacts with animal motifs, jars and beakers, inscriptions, skeletal remains, bronze or gold objects or lapis pieces have been discovered.

These cities probably had strong trading relations with Mesopotamia: trading was crucial for economic growth in the Indus Valley. As the northern regions of Afghanistan and Pakistan were mainly rich in lapis lazuli, they were mined and sold to Mesopotamia, by camel or by boat. Tin, terracotta pots, beads and shells, gold, silver and different metals, turquoise and other gems and flint were also traded with Mesopotamia: there were mainly luxurious goods, originating from Pakistan, China or Persia. According to historians, this constitutes one of the earliest long-distance commercial links in the world, estimated to have started in around 3000 BC. 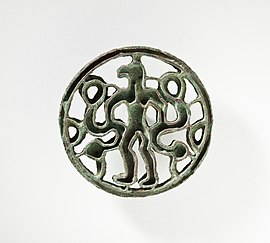 Bactria-Margina seal, showing a bird-headed man (garuda) with snakes. Northern Afghanistan, around 2000-1500 BC.

The Bactria-Margiana Archaeological Complex (BMAC), also known as the Oxus civilisation was another important bronze age civilisation in Central Asia, covering northern/central Afghanistan, Turkmenistan, Tajikistan and Uzbekistan, dated to ca. 2300-1700 BC. Its population originated from Indo-European migrants who settled in Central Asia and Pakistan, according to the Indo-Aryan migration theory.

The inhabitants of the region were sedentary people who farmed wheat and barley, and who developed material culture such as bronze, jewellery and other semi-precious stones. The BMAC is also where the earliest evidences of wheeled transport has been found.

Bactria-Margiana inhabitants also traded with people from Eurasian steppes in the north and the Iranian Plateau. Just like the Indus Valley inhabitants, the people from the BMAC had nearby access to large amounts of lapis which they traded with other civilisations.

Historians are still unsure about the regions occupied by the Median Empire at its extent (around 600 BC), especially in the very eastern regions (Central Asia). It is possible that Afghanistan was occupied at one time, and very probable that Afghanistan had economic or political relations with Medes.

At around 550 BC, the Persian Empire, or Achaemenid Empire as it was named during its first phase, was founded by Cyrus the Great. The Empire quickly took a large territory, reaching all the way to Afghanistan (Indus Basin). The large empire was divided in different provinces, or satrapies, ruled by a governor, named satrap. These were mainly in the west, around present-day Herat, Farah or Zaranj. The entire western half of the country was conquered by the Persians.

Alexander the Great and the Seleucids[edit | edit source]

The Seleucid Empire at its extent

In 328 BC, Alexander the Great took full control over the Achaemenid Empire, and in 325 BC, he extended his empire all the way to Afghanistan. Facing tribal armies of Afghanistan, the Macedonian king had to face very difficult battles in order to conquer the region. One of the main battles was the Siege of the Sogdian Rock, a fortress north of Bactria which was captured by Alexander the Great and his army. Alexander went all the way to Bactria, in northern Afghanistan. He then decided to head south, towards India.

The huge Empire was then fought for by a number of generals and friends of Alexander the Great (called Diadochi in Greek). It was finally divided in three parts, the largest one being the Seleucid Empire, covering the territory from the former Persian Empire, and ruled by Seleucus I. 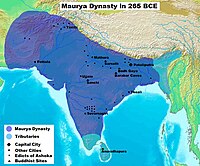 The Mauryan Empire under Ashoka's reign

After Alexander the Great's death, South Afghanistan was given by Seleucus I to Chandragupta Maurya, emperor of the Mauryan Empire, through a peace treaty, upon marriage and in exchange for 500 elephants.

The Empire was then ruled by Ashoka the Great, who extended the Empire in the east and in the north.

During the Mauryan Empire, Buddhism and Hinduism were introduced to Central Asia, and many religious temples and sanctuaries were created. Afghanistan was also a pilgrimage route.

Gold coin for Diodotus I. The Greek words ΒΑΣΙΛΕΩΣ ΔΙΟΔΟΤΟΥ, meaning "King Diodotus", are written on its back.

In 250 BC, Diodotus I, satrap of Bactria, founded the Greco-Bactrian Kingdom in the north of Afghanistan. His territory grew and ended up encompassing northern Persia, Afghanistan, Turkmenistan, Tajikistan and Kyrgyzstan in around 200 BC. The Empire was shared between a Greek culture, which came from Alexander the Great, and a Persian culture. After his death succeeded a number of different kings, until the end of the kingdom in 130 BC.

The Indo-Greek kingdom was a Hellenistic kingdom which emerged in around 180 BC in north-west India, and which extended north towards the Greco-Bactrian kingdom.

In the 1st century BC, the Scythians, or Saka, an Iranian and Eurasian nomadic tribe, migrated to Central and South Asia.

The Parthian Empire, also known as the Arsadic Empire, was the second Persian Empire, founded in around 247 BC, in Northern Iran, by Arsaces I of Parthia. The Empire then reached to Afghanistan in 100 years, after a long series of conflicts with the Seleucid Empire. In the 1st century BC, the Indo-Parthian Empire, located in modern-day Afghanistan and Pakistan, made an alliance with the Parthians.

In around 130 to 100 BC, the Tocharians, who inhabited oasis settlements on the Tarim basin (north-west China), developed city-states, which served as stopover or depot for the Silk trade. They lived in a territory encompassing the north of modern-day Afghanistan.

In the early 1st century AD, the Kushan Empire was formed in Bactria. The Empire took over the Tocharians and grew to encompass most of present-day Afghanistan. The Kushans came from the Yuezhi tribes, who lived in eastern China, and who migrated to southern Asia in the 2nd and 1st centuries BC. The Kushans were fervent buddhists, as many buddhas and other buddhist figurines or monuments have been found dating from the Kushan period. The Empire was founded by Kujula Kadphises in the north of Afghanistan, but was then expanded under the reigns of Vima Taktu and Vima Kadphises, until it reached its peak, under Kanishka the Great.

The Sassanid Empire, or Sasanian Empire, was founded by Ardashir I, or Ardashir the Unifier, after the collapse of the Parthian Empire, in 224 AD, and replaced the Persians. The Empire was then expanded in the West, and by 260 AD most of Central Asia had been invaded. The Sassanids took over the Kushans in 250 AD. The Empire lasted a very long time, and knew a Golden Age, from 300 AD to 620 AD.

While Zoroastrianism was the main religion under the Empire, Christians and Jews were persecuted. The Empire had a strong army, which made it stable and protected it from other invaders.