From Vikidia, the encyclopedia for 8 to 13-year-old children that everybody can make better
(Redirected from Hindi language)
Jump to: navigation, search

An Hindi writing from the 1750s

Hindi is a widely spoken and written language in north India and most other places in India. Urdu, the most commonly spoken language in Pakistan is almost the same grammar as Hindi; the difference is that Urdu is written in the Arabic alphabet from right to left.

Hindi has developed from Sanskrit, the ancient language of India.

Hindi is split in many dialects.

The most common form of Hindi is known as Hindustani. It has taken words from the Dravidian languages of South India, many words from the Persian, Arabic, Turkish, English, and Portuguese languages.

Some other dialects of Hindi are: Avadhi, Braj, Bhojpuri, Bundeli, Bagheli, Chhattisgarhi, Dogri and Marwari. Hindi is also spoken with regional accents like Haryanvi, Rajasthani, and Bengali.

In the past few years a new Hindi language (with unwritten grammar) has emerged from Mumbai. It is being spread by Hindi films. It is becoming very popular with younger generation.

Hindi does not use Latin characters like the English, but instead uses a script called devanagari. Devanagari is a type of writing system, called an abugida, where the base character is a syllable that includes a consonant and a vowel. The first consonant in devanagari is क, which stands for the sound "ka". The character can be changed to use different vowels. For example, का कि की कु कू के कै को कौ are the k character with each of the main vowels in Hindi. There is also a different form of the vowels when they appear at the beginning of a word or as the second of a pair of vowels. The basic vowels are अ आ इ ई उ ऊ ए ऐ ओ and औ.

Who speak this language?[edit | edit source]

There are varying estimates for how many people speak Hindi. It is estimated to be between the second and fourth most commonly spoken language in the world. The number of native speakers varies depending on whether or not very closely related dialects are counted. Estimates range from 340 million to 500 million speakers, and as many as 800 million people can understand the language. Hindi and Urdu are similar in vocabulary but different in script; in everyday conversations, speakers of both languages can usually understand each other. There are 60 to 100 million speakers of Urdu. 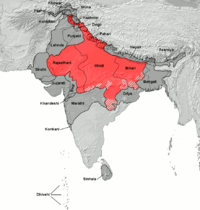 The areas of India where Hindi is most prevalent.

In 1997, a survey found that 66% of Indians can speak Hindi. Almost all speakers of Hindi live in India or Nepal, though Hindi can be found all over the world where its speakers have moved to. Countries outside of India and Nepal with a significant number of speakers are South Africa, Mauritius, the United Kingdom, the United States, Yemen, and Uganda.

Hindi has its roots in the ancient language of Sanskrit. The spoken language changed over the centuries from the Old Indo-Aryan such as Sanskrit to Middle Indo-Aryan Prakrit languages. These language sometime were developing around 1000 A.D. into the dialects and languages of today's northern India. Hindi started to develop in the 7th century as "Apabhramsha", but became pretty stable by the 10th century. Hindi contains plenty of words from Persian and Arabic origins, coming from the Persian people that ruled much of northern India for centuries.

The word order in Hindi sentences is different than in English. In Hindi the verb usually comes last in the sentence. For example, in the sentence given above for "What is your name?", the order the words are actually said in Hindi is "your name what is". Aapka means "your", naam means "name", kyaa means "what", and hai means "is". With practice this difference isn't very hard to get used to.

A poem in Hindi[edit | edit source]

Fish is the queen of water,

Her life is water,

touch her (with your hand) and she will get scared,

take her out and she will die.