Henry Ford[1] was an American entrepreneur and the founder of the Ford Motor Company. With this company he got 199 billions of dollar; with this amount he is the 9th rich person in the history.

His jobs before 40 years[edit | edit source] 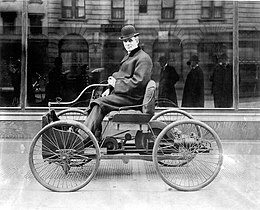 In 1888 he was employed by the company Thomas Edison, that, with Joseph Wilson Swan, invent the lamp, Detroit (North East of the United States). As a hobby he began to build a car (with an internal combustion engine, invented by Benz and Daimler), which was experienced in the garage of his home in 1896. This vehicle was called Quadriciclo Ford. At 36 he left his job as Edison and remained for three years at Automotive Company Detroit.

The logo of the Ford Motor Company

Mister Ford, after he left Detroit Automobile Company, founded his company: the Ford Motor Company. Those years were characterized by a strong historical movement: the Second Industrial Revolution. For this reason, in his company, Ford applied the system of assembly line. The most remembered car is the Ford T , famous for its simplicity and its characteristic black color. This model was built until 1927, counting more than 15 million cars. 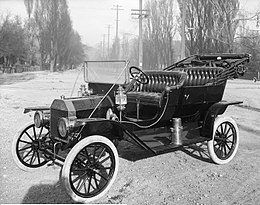 He also invented another car, soybean car , but never on the market; its characteristic was the only structure made of hemp and motor powered from the same plant.