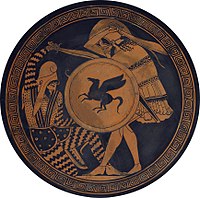 The Greco-Persian Wars were a series of wars fought between Ancient Greece and the Persian Empire (now Iran). The wars started in 499 BC and lasted until 449 BC.

Troubles began when Persia under Cyrus the Great conquered the Greek colonies of Ionia in 547 BC. In 499 BC, the Ionian Greeks revolted, but their resistance collapsed in 493 BC. The Ionians burnt the regional capital of Sardis, and the Persian king, Darius the Great vowed revenge. 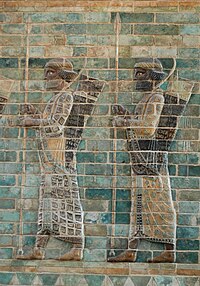 Lancers, detail from the archers' frieze in Darius' palace in Susa, about 510 BC

The first Persian invasion of Greece occurred in 492 BC. Darius the Great was determined to subjugate Greece. This invasion was brought to an end with the Greek victory at the Battle of Marathon. The Persians retreated to Asia.

In 478, the Greeks assembled under Athenian leadership as the Delian League. The Delian League continued to do battle with the Persians over the next 30 years. At the Battle of the Eurymedon in 466 BC, the League defeated the Persians and freed the Ionian cities. In the following years hostilities wound down, and the Greco-Persian Wars ended quietly in 449 BC.