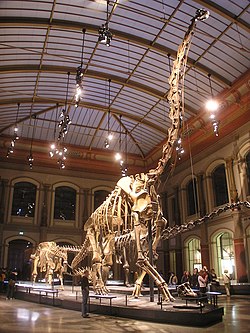 Giraffatitan is a dinosaur. The Giraffatitan was the largest dinosaur. It has a long neck and tail, and a tiny brain, it's length about 80 feet (25M), his wight about 60 tones (54500 kg). Giraffatitan's family is Barchiosauridea.

Giraffatitan was alive in the Late Jurassic period. It was lived at Tanzania, Africa.

Giraffatitan was herbivore. It was eating from top of Jurassic trees, because it has long nick. Also his teeth help him because his teeth shaped chisel lining in front in his mouth.