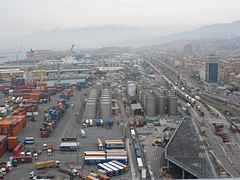 Genoa (Genova in Italian) is the main city of Liguria, in Italy. It is well known for its rich cultural heritage and its commercial harbour.

The inhabitants are called Genoese in English, Genovesi in Italian.

The flag of Genoa is: with a horizontal red cross and around white

On April 25 there is the band

A monument is the aquarium of Genoa

The typical dish of Genoa is saffron rice

A story is 101 stories of Genoa

Genoa port city, there is a splendid aquarium.

For its vast history it is in a few words to make a bibliography, in fact it is contained in many books.