It is thought that gelato was invented during the 16th and 18th centuries in Paris, by the architect Bernardo Buontalenti. He had adapted the existing sorbet recipe by adding egg yolks, sugar and milk to make gelato. Shortly after its creation, gelato was introduced to the court of the French queen Caterina de’ Medici, where it was well received. Following this, an Italian chef Francesco Procopio dei Coltelli started selling gelato in his Parisian cafe, therefore spreading the creation to the masses.

Overtime, gelato began to appear in menus and recipe books. The invention of artificial ice allowed street vendors to start selling gelato, and the cone was created to make eating and distributing the treat easier. Starting from the 1900s, shops specialising in gelato were set up. Advancements in science after World War II led to the creation of sophisticated freezers, mixers, and pasteurisers which assured food safety and quality. The status of gelato vendors as artisans today is because of the artistic flair added to the selling and display of gelato, making its trade a novelty in the process. 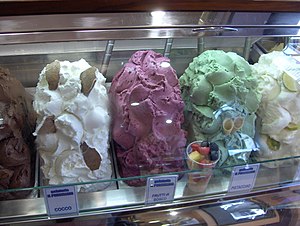 Gelato is made with milk, sugar, egg yolks, flavoring, and mixed with less air as compared to traditional ice cream, which contains additional full cream. Because the gelato mix does not use so much air, it has a more intense flavor than ice cream, and has lower levels of fat. Sorbet on the other hand is completely fat free, made with the same process as ice cream but using only sugar, flavoring and water. Despite this, it usually has a high sugar content.

There are a wide variety of gelato flavors to choose from, and names of flavors vary for every company. Traditional or “classic” flavors include Crema (original “unflavored” gelato), Gianduja (chocolate hazelnut) and Vanilla. Some special flavors use unusual ingredients such as black tea leaves, coconuts, bananas and cardamom. There is even gelato like the Caffè Espresso (made with freshly brewed espressos) and Créme Fraîche (similar to cheesecake). Gelato flavors are limited to the artisan’s imagination and creativity.

Seen as a healthier alternative, gelato is gaining more and more popularity as an artisan ice cream. With 9.4% of the artisan ice cream market being made up of gelato sales, it is expected to grow even more in the coming years.

To make vanilla gelato, use one and a half cups of milk, one cup of sugar, and one split vanilla bean. Combine the milk and sugar in a saucepan, and cook until it comes to a simmer before removing from the heat. After this, add vanilla seeds to the milk, followed by the bean, and allow the mixture to sit for thirty minutes. Strain this into another bowl, throwing out the vanilla bean as you do so. Cover the bowl and place it in a refrigerator for at least two hours or overnight. Once this is done, remove the gelato mix and place it into an ice cream maker, freezing it according to the manufacturer’s instructions.