From Vikidia, the encyclopedia for 8 to 13-year-old children that everybody can make better
(Redirected from Frankenstein)
Jump to: navigation, search

Frankenstein; or, The Modern Prometheus is a horror novel by Mary Shelley. It was published in Londonin 1818. The novel was her contribution to a horror story competition among her friends, Percy Bysshe Shelley (her future husband), Lord Byron, and John Polidori, Percy's doctor.

Frankenstein is about a hideous monster created from dead body parts. The tale is often considered the first science fiction novel, and has had considerable impact on western culture. It has been adapted to stage plays and movies many times.

The novel tells the story of Dr. Victor Frankenstein and a monster he creates from dead body parts. He brings the monster to life using the power of a tremendous electrical storm. The monster causes a number of unforeseen disasters and kills a number of people. The doctor creates but destroys a female monster intended as a mate for the original. The monster rages and flees to the Arctic on a dog sled pursued by the doctor. Doctor Frankenstein dies aboard a rescue ship, but the monster disappears into the Arctic seas on a raft, never to be seen again.

Shelley began writing Frankenstein when she was 18 years old, and completed it at the age of 20. In 1814, before the novel was begun, she traveled through Europe. In Germany, she visited Castle Frankenstein near Darmstadt with her future husband Percy Bysshe Shelley. At one time in this castle, experiments were conducted on living humans. She later suppressed any mention of this visit in order to claim complete originality for her novel.

She may even have based the fictional Dr. Victor Frankenstein on Percy Shelley. His pen name was Victor and at one time he had conducted experiments with magnetism, gunpowder, and other substances in his rooms at Oxford University. These rooms were cluttered with all sorts of scientific equipments.

In Switzerland, occult practices were topics of conversation among her traveling companions. Mary, Percy Shelley, Lord Byron, and John Polidori, a doctor, agreed to compete among themselves in writing horror stories during a long rainy summer. Mary pondered over her story line until a dream of a scientist inspired her. The result was Frankenstein. The novel was published anonymously in London by a small publishing house in three volumes in 1818.

Mary Shelley in a miniature by Reginald Easton (1820)

The story has been adapted to movies and other media several times. The first adaptation was Henry M. Milner's The Man and The Monster; or The Fate of Frankenstein. This drama was staged in London in 1826.

In 1910, the first Frankenstein movie was released by the Edison Studios. It was 16-minutes long, silent, black and white, and starred Augustus Phillips as the doctor, Mary Fuller as the doctor's betrothed, and Charles Stanton Ogle as the monster. In 1915, another silent movie was released called Life Without a Soul. This movie is lost, and not much is known about it.

In 1931, the first full-length movie was released called Frankenstein. This black and white "talkie" starred Boris Karloff as the monster, and Colin Clive as the doctor. It was directed by James Whale, who also directed the 1935 sequel, Bride of Frankenstein. Some of the original cast returned for the sequel with Elsa Lanchester joining them as the Bride. 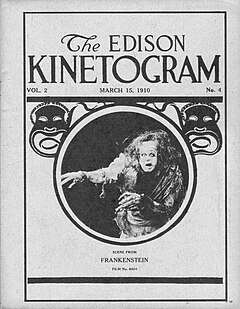 The first movie Frankenstein monster was Charles Stanton Ogle in 1910

There have been countless adaptations and parodies over the years including the comedy movie, Young Frankenstein (1974) from Mel Brooks, and The Rocky Horror Picture Show (1975). Frankenstein is an enduring tale which continues to inspire movie-makers and other artists.