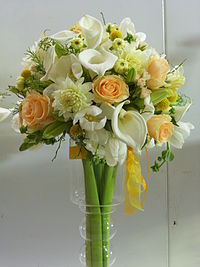 A beautiful flower bouquet, made of roses, dahlias and calla lilies. 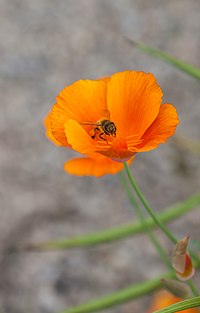 A bee, on a California poppy flower. 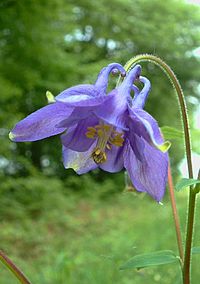 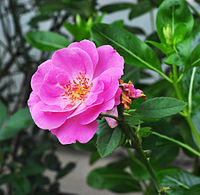 There are many different species of roses in the nature, and even more human breeds in gardens. 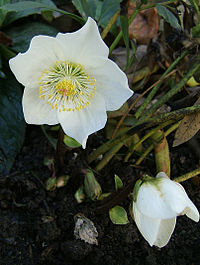 The Christmas rose is not a true rose, but another species of hellebore. 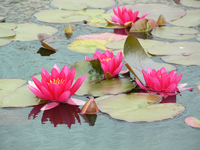 Waterlily flowers on a pond.

A flower is the reproductive organ of some plants : the plants that make flowers are called flowering plants.

Most known flowers are usually beautiful and brightly coloured : this is because, since plants don't move, they have to attract insects (like bees, or butterflies, so they carry their pollen for them ; some other kinds of flowers don't use insects, but wind, and are less coloured, because wind don't need to be attracted !

A flower is usually compound of the following elements :

This means that pollen has to arrive from a stamen to the pistil. Moreover, in many plants, this can't be a pollen grain from the same flower, it has to be from a different one ! Problem is that plants (and, thus, flowers) don't move : they have to "find" a way to have their pollen carried from the stamina to the pistil. Many ways exist, that lead to different kinds of flowers organisations :

Some plants even bear only one kind (either male or female) of flowers : there are then male and female flowers, and both are then needed to have fertilisation.

Depending on the way they are pollinated, many kinds of flowers can exist :

Flowers pollinated by insects (or other animals) have to be found by the animal from far away : they exhibit bright colours : most often, the petals are big, and full of colours, but, in some cases, this is the sepals that are coloured, or even both, as in tulips : in this case, in it almost impossible to see difference between petals and sepals, except by examinating wich ones is placed around the others : both petals and sepals are then called tepals.

To attract insects, these flowers don't have only the vision : petals are not only big, and coloured, they also produce a sweet, sugared, liquid, called nectar, and emit fragrance. This is why flowers usually smell good.

Some rare orchid flowers are pollinated by bats, that use echolocation to get its bearing ; this flowers have special shaped petals, that reverberate the sounds emit by the bat, so the flower "indicates" its position to the bat by the sound !

In the other hand, the flowers that are pollinated by the wind don't need to have big petals to be seen from far away, since the wind don't see ; furthermore, such kinds of petals would in fact be disability, by stopping the wind. Flowers that are pollinated by the wind usually have greenish, short petals and sepals,or even no petals at all. They are usually less "beautifull" (because less coloured). They have long stamina and pistil that swing in the wind.

While many flowers use to have only one flower, at the edge of the stem, many other have various ones, arranged in a special pattern called an inflorescence. While some plants have big flowers, others have smaller ones, gathered to be seen easily from a distance. In some case, inflorescence might be very complex. Some inflorescences look like a single flower, when seen from far away.

In human culture, flower are one of the symbol of beauty. Interestingly, almost every human culture on Earth consider flowers as beautiful. Flowers are picked, and gathered to make a bunch, called a bouquet. Men often offer bunches to ladies, that keep it in a vase.

In many occasions, bunches play a special role. For example, the wedding bouquet, that is tossed during the celebration.