Florence is the capital of the Italian region of Tuscany. It is located on Italy's northwest coast. It is a stunning medieval city divided into two parts by the River Arno that flows from the Apennines through Florence and Pisa and on to the Ligurian Sea.

The inhabitants are Florentine.

The Florentine are of Italian nationality 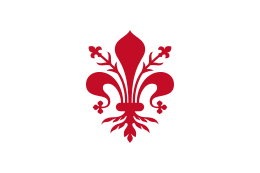 The flag of Florence.

The flag of Florence:

- Usually with the WHITE background;

- The image of Florence of the flag resembles a fiery sword

June 24 in Florence is the feast of St. John

In Florence there is the natural history museum

The city of Florence is the heart of the metropolitan arena

In the Middle Ages it was an important artistic, cultural, commercial, political, economic and financial center. In the modern age it was the capital of the grand duchy of Tuscany. On the side of the church the Santa Maria Maggiore,look up and you will see a lady's petrified head appear from the wall. Is the Berta a greengrocer.

By the way the Vechietti and way Strozzi there is a sculpture of a little devil the Gianbologna.

The favorite books of the Florentines are many one in particular is called: Anglo-Florentine gardens.

Florence has a very old bridge and many particular statues.

Florence has a vast amount of books that I can not explain.