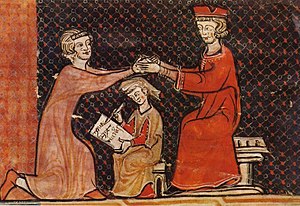 The ceremony of homage

In the Middle Ages, fief was the reward that the upper Lord (the suzerain) granted to the vassal that is the person who agreed to put himself in her service. The nomination of the fief was realized during the ceremony of homage

Originally the fief was granted during the life of the beneficiary. As in every change of suzerain or vassal it was necessary to redo the ceremony of the tribute vassalique, the fief was thrown in. To guarantee the transmission of the fief to their descendants the vassals obtained the heredity of the ownership.

The fief can be removed from the vassal if this one by its actions breaks the link of loyalty which connects him to his suzerain, it is what we call the faithlessness. In this case the suzerain can take back the fief. Often the suzerain is obliged to wage war to his vassal to reach there. It is what arrived at the beginning of the 13th century between king of France Philip II August and his vassal, for his fiefs situated in France, king of England John Lackland.