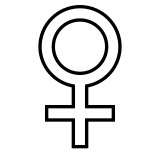 Symbol of the female

Female (♀) is a biological sexual status in many multicellular organisms. It is the organism, or part of an organism, that produces non-mobile gametes, the ova. In addition, female organisms almost always carry the zygotes.

In mammals, including humans, female organisms differ further from males due to the presence of organs necessary to mature the zygote and feed after birth. Consider a uterus and milking glands. In insects and fish, the female organisms are usually larger than the male.

In humans and many other animals, the fact is whether an organism is genetically determined. In reptiles, however, the temperature of the eggs is also affected. Some animals, such as snails, may change in sex.