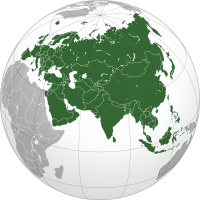 Map with Eurasia in green.

Eurasia is a supercontinent in the Northern hemisphere which is made up of Europe and Asia. The area is almost 54 million square kilometres (21 million square miles). In Eurasia there are about 90 different countries [1]. Two thirds of the inhabitants of Earth, about 70%, live in Eurasia.

Age: In the region of 350 million years