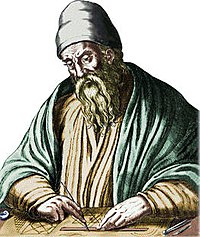 Euclid was born in around 325 BC, and he was died in 260 BC, in Alexandria (in Egypt). He was 65 years old. We haven't got lots of informations about his life. However we know that he was a Greek mathematician and he stills very famous today. He was the most prominent mathematician of Antiquity. He probably studied in the Plato's Academy, in Athens, in Greece.

He is often referred as the Father of Geometry. He is very popular for his thesis on mathematics The Elements which is the most influential mathematical works of all time. He works on the theory of perspective, conic sections, spherical geometry, number theory.

He wrote a book called the Element and also other books about mathematics, like Catoptrics or Optics.

Euclid’s Elements is a collection of many definitions, theorems, constructions… And also the mathematical proofs of the propositions.

It is composed of thirteen books written by Euclid.

It about geometric algebra, which helps in solving many algebraic problems, for example the problem of finding the square root of a number.

Euclid’s Elements has proven instrumental in the development of logic and modern sciences.

The original is on Greek, then in Arabic and now on many modern languages.

There is almost no information about his life, so some people ask themselves if Euclid is not the name of a group of mathematicians who gathered their knowledges and took the name Euclid.

It is often said that The Elements is one of the most translated, published, and studied of all the books produced in the Western world.