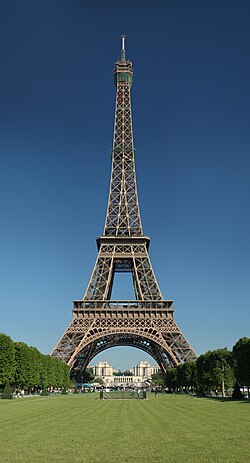 The Eiffel Tower as seen from the Champ de Mars

It cost £35 million to build. It is 300 metres tall, but this height does not include the 24 m aerial (antenna) on the top; the total height of the structure is 324 m (1058 feet).the same height as a 81 storey building . There are also 1,665 steps inside the Eiffel Tower. It weighs 10,000 tons. It consists of 18,038 pieces and 2 1/2 million rivets. There are 20,000 sparkling lights and 80 kilometers of cables covering the structure. The weight of paint used is 60 tons, and the surface to be painted - 250,000 m2. Three separate colors of paint are used on the Tower in order to enhance the impression of height, with the darkest on the bottom and the lightest at the top.

The paper used to print the visitor's tickets in a year weighs 2 tons.

It was built by Alexandre Gustave Eiffel. There were 107 bids submitted to construct the Eiffel Tower, 50 people worked on the design, and more than 100 built the parts. 132 workers assembled the parts on site. Construction began on January 28, 1887 and was concluded on March 31, 1889.

When the tower was built, it was only meant to be kept for 20 years. People did not like the Eiffel Tower and wanted it taken down. After the 20 years, the tower became the property of Paris again. By this time, the city had learned that the tower could be used to help with communications. The military used the tower to communicate during battle. Nobody wanted it to be taken apart.