From Vikidia, the encyclopedia for 8 to 13-year-old children that everybody can make better
(Redirected from Egyptian pyramids)
Jump to: navigation, search

Egyptian pyramids are tombs built in the geometric shape of pyramids. They were built by pharaohs in ancient Egypt. The pyramids are one of the seven wonders of the ancient world. They oldest, and the only ones that have resisted through until now the effects of time and earthquakes.

The Pyramids of Giza are the best known because they are the largest, the most complete and the best conserved today, but other pyramids were built before and after them. We can note the technical evolution of the pyramids over the centuries. Before the pyramids, the graves of the pharaohs and of high characters were mastabas, large square tombs covering cellars and funerary chambers.

The first pyramids, those of the Third Dynasty were step pyramids made of several stacked mastabas, forming gigantic steps drawn up towards the sky.

Then the Kings of the Fourth Dynasty made pyramids with smooth faces, which became objects of perfect geometrical form, henceforth and for a long time the tallest and the largest constructions built by man. The pyramids of Egypt are situated on the long desert limestone plateau which stretches above the left bank of the Nile.

Stepped pyramid of Djoser. The most ancient site is that of Saqqarah, which dominates the ancient city of Memphis, capital of Lower Egypt, a little south of the current city of Cairo.

The first pyramid is that of King Djeser (or Djoser), of the Third Dynasty who ruled before 2800 BCE. At first a simple mastaba, it was subjected to a succession of expansions and elevations, until becoming an immense monument of 109 x 121 meters, with a height of 62 meters

It contains a huge central cellar and a network of corridors, (some decorated with a green earthenware tile), leading to rooms and funerary storerooms.

Step pyramid of Sekhemkhet. Sekhemkhet, Djeser's successor didn't have the time to make his own step pyramid, predicted to reach a height of about 70 metres above a base of 120 x 120 metres. Several portions of foundation remain, just reaching about ten meters. A large complex of corridors and well conserved underground storerooms, leads to central burial chamber.

Maidum Pyramid (kings Huni and Snefru) The Pyramid situated close to Meidoum, at the entrance of the large irrigated plain of Fayoum, resembles from a distance a huge ice cream halfway melted. This pyramid, by its halfway collapsed state reveals to us all its structure: there is no doubt, the Pharaohs and their architects had an unlimited taste for experimentation!

King Houni, (Third Dynasty, reigning near 2600 - 2575 BCE) begins the construction for a henceforth classical step pyramid, finishing it then increasing the volume by the addition of "slices" arranged at an angle on the four faces.

Not content with the feat, his successor Snefrou (Fourth Dynasty, reigning from around 2575 BCE) realized an entirely new idea: he dresses the great step pyramid with a lining carefully laid on the sides of the walls. Giving the monument the aspect of a pyramid with smooth faces with a base of 144 meters and a height of 92 metres. The angle of this smooth pyramid is 51 degrees, that is to say very steep.

The most likely hypothesis is that this pyramid collapsed when it was completed or about to be. It can be distinguished in the diagram and the photo caption, how much of the building owned visible elements or refurbished parts correspond to the outer walls, while the rumble strips were originally concealed parties.

A ramp leads to several rooms, two of which have been discovered recently, around 2000, by the French architect Gilles Dormion.[1] 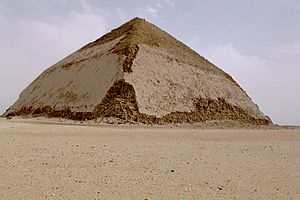 It marks an important step in the development of the pyramids' architecture sometimes it has a smooth limestone surface and two rooms connected by a narrow casing, but each filled in a descending passage The northern descending passage leads to an underground chamber, while the second descending passage on the west - configuration not found elsewhere - leads to another room above the other, in the masonry itself. 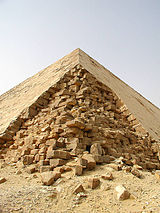 Salvagers had begun to remove the stones from one corner of the pyramid, thus revealing the crude, cheaply done, internal masonry. From the outside, this pyramid looks like the best preserved of all, but inside, the entrances, situated at staggering heights, lead to cracked and sagging descending corridors that do not inspire confidence. The rooms are greatly damaged, halfway filled in and supported by struts, probably since their creation.

It is accepted that the change in slope was decided following the internal collapse of rooms and tunnels. After final calculations, the pyramid was judged useless by the pharaoh, who then had to build a third...

Pyramide rouge (de Snéfrou)
Red Pyramid (Sneferu) Unlike the previous two, Snefru's architects seemed to have played it safe for this third pyramid which, probably, satisfied him enough finally to establish his burial chamber there. For all his three pyramids together, Snefru moved no less than 3.3 million cubic meters of stone, which most certainly makes it the largest architectural project in the entire history of mankind.

Cross-section of the Pyramid of Cheops The Giza Plateau, north of the previous sites, dominates the modern city of Cairo. it is one of the three famous of the XXVI century

The Pyramid of Cheops (Khufu in the language of the Egyptians), built around -2560, is the most massive (base 230 m) and the highest of all (146 m). The interior network of corridors and rooms is complex and mysterious, with its descending corridor and it's unfinished subterranean chamber, and it's ascending column which leads firstly to the "Queen's chamber", via a horizontal column on the other hand is the "King's chamber" by the "great gallery" with a vast cantilevered ceiling. The Great Pyramid was entirely covered in a coating of fine polished limestone, of which there remains only the first layer. The rest, removed with the aid of levers and restored by quarrymen, has been used since the Middle Ages in the construction of monuments in Cairo. However, one has several doubts on the architectural success of this assembly, if one considers that the funerary chamber of the King, the final goal of the operation, is gravely and irredimably cracked under the weight, very probably in the concluding phase of the monument.

However, one has several doubts on the architectural success of this assembly, if one considers that the funerary chamber of the King, the final goal of the operation, is gravely and irremediably cracked under the weight, very probably in the concluding phase of the monument.

The pyramid of Chephren[edit | edit source]

The second pyramid, built around 2540 BCE., is that of Chephren (Khafre, in the language of the Egyptians). It's almost as big as it's predecessor with a base of 215 meters, it reaches a height of 143 meters, with a very accentuated slope of 53 degrees, in a ratio of 4/3. It retains, at its summit, a good part of its polished limestone surface, clearly showing how the stone facing, suspended overhead, is locked to the mass of masonry. The interior arrangements include a chamber flush with the ground, and another underground. They are of a modest appearance, corresponding so little to the Pharaonic splendour, that one has always suspected the existence of other chambers, never discovered. The tunnels, made deep in the mass of the pyramid, testify to this very ancient conviction.

The Spinx of Giza watches over the funerary complex of Chephren. But it may as well see its origin reaching back to the work of Cheops, or even an earlier epoch.

The Pyramid of Mykerinos[edit | edit source]

The lost sarcophagus of Mykerinos - The pyramid of Mykerinos (Monkaoure, in the language of the Egyptians), dates from around 2520 BCE. It is the smallest of the three pyramids of Giza, with half of the dimensions of its two predecessors: a base of 105 meters, and a height of 65 meters. The angle is 51 degrees, according to the ratio of 14/11. They say that the volume of this pyramid represents hardly a tenth of its neighbors: a good exercise is to check it out! The pyramid has kept, at the base, a well established Aswan granite surface, not refaced. We also know that the tallest part of the monument was very simply covered with thin limestone. We think that this incompleteness is due to the premature death of the King.

After Giza, the other pyramids of Egypt[edit | edit source]

Found along the left bank of the Nile are around 80 pyramids, all of which are tombs of the Kings and the dignitaries of ancient Egypt. The masters of Egypt had continued to build pyramids during the centuries after those of Giza! But these more recent pyramids, even if their distribution and their interior decoration are of great interest, resemble shapeless hills or mounds of ruins, or even, more often heaps of sand and pebbles. Without doubt the successors of the Kings of the 4th dynasty, no longer had the means, the manpower, or the materials, to do as well as their glorious ancestors.

Other pyramids around the world[edit | edit source]

in America : the Aztecs, the Mayans, the Incas ; Angkor, in Cambodia, also has a pyramid; XX Template: E century saw the construction of glass pyramids, like the Louvre in Paris, or that of Brussels, near the Botanical Garden.