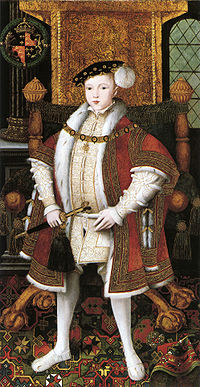 Edward was the son of Henry VIII of England and Jane Seymour. His mother died 12 days after his birth. He became king at the age of 9 when his father died. Edward died at age 15.

His half-sisters were Mary I and Elizabeth I. Before he died, he named Protestant Lady Jane Grey to the throne in an attempt to keep his Catholic half-sister Mary from returning the country to Catholicism. Grey however was only marginally related to the Tudors. She was deposed and executed within days of her coronation by Mary I.

Edward VI died on 6 July 1553, possibly of tuberculosis. He was buried on 9 August 1553 in the Henry VII Lady Chapel at Westminster Abbey.