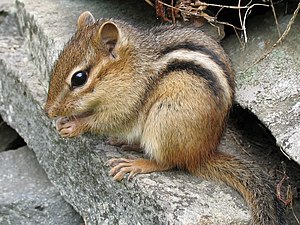 The Eastern chipmunk (scientific name : Tamias striatus) is a species of chipmunk found east of the Mississippi River in the United States. The name "chipmunk" comes from the Odawa (Ottawa) word ajidamoonh or the Ojibwe word ajidamoo, which translates literally as "one who descends trees headlong."

The Eastern chipmunk is a rodent. It creates a burrow only inches below the surface of the Earth. This burrow has several chambers for sleeping and storing foods. It has several exits and sometimes lengthy tunnels connecting the various chambers. The chipmunk hides the entrance and exits with dry leaves, twigs, and mosses.

It eats seeds, berries, and other wild fruits as well as some insects and garden bulbs like tulips and daffodils. The chipmunk searches his woodland surroundings for food and carries it back to its burrow in his cheek pouches.

The Eastern chipmunk remains in its burrow through the winter when food is scarce. The animsl eats from his stores and sleeps for long periods. In the spring, he emerges and looks for a mate.

His enemies are owls, hawks, foxes, house cats, and other forest predators. In the wild, he may live three years. In captivity, he may live as long as eight years.

The chipmunk is a backyard animal that American families enjoy watching and feeding goodies like sunflower seeds. The Eastern chipmunk has appeared as a fictional character in Walt Disney's Chip 'n' Dale cartoons and comic books, and as a character in the Alvin and the Chipmunks children's stories and TV cartoon series.