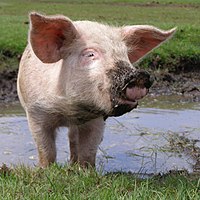 The domestic pig (scientific name : Sus scrofa) is a domestic mammal, bred for its meat (pork meat). It is a close relative to the wild boar. The female pig is called a sow.

The pig has been bred since the Antiquity : since it is omnivore, it is quite easy to breed, because it can eat almost evreything.

Neither the Muslims nor the Judes eat pork meat.

The pig has short hair, and is often told to be "pink". In fact, there are many breeds of pigs, and many have light color, e. g. white, or pinkish, but some are brown or black, or even spotted.

The pig like the mud, because it takes of insects, and relieve itching. This has led to believe that the pig is a dirty animal, whereas it is not.

The third little pig is building its house of bricks.
Retrieved from "https://en.vikidia.org/w/index.php?title=Domestic_pig&oldid=81047"
Categories:
Hidden category: