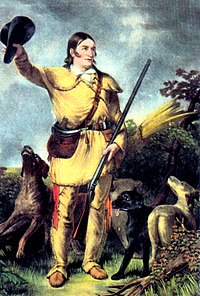 Davy Crockett (David Crockett; August 17, 1786 – March 6, 1836) is an American folk hero. He began life as a frontiersman and trapper. He later entered politics, and was elected to the United States House of Representatives. Crockett's political career was a teeter-totter: he lost some elections and won others. In 1836, he went to Texas. Crockett was killed at the Battle of the Alamo.