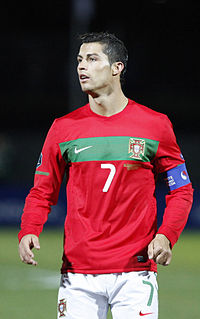 Ronaldo in the shirt of Portugal's national team.

Cristiano Ronaldo dos Santos Aveiro, simply known as Cristiano Ronaldo or even CR7 is a Portuguese football player born in Funchal, in the Açores islands group of Portugal, on February 5th of 1985. He plays as a striker in the Spanish club of Real Madrid and the Portugal national football team.

Making his revelations during his presence in the Sporting Clube de Portugal, he went through the English club of Manchester United, where his nickname "CR7" appeared, but transferred to Real Madrid worth £80 million (€94 million/$132 million) in summer 2009. His contract with Real Madrid, under the terms of which, makes him being paid €21 million per year (after taxes), makes him one of the highest paid footballers in the world. He has scored more than 300 goals in his career in Spain, and has exceeded the 75 goals in UEFA Champions League.

It is also known that Cristiano Ronaldo's favorite player while growing up was Ronaldo, one of the best Brazilian footballers.