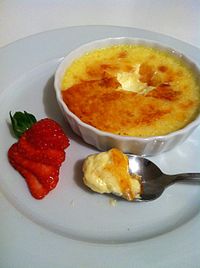 Crème brûlée served with a strawberry

Crème brûlée is a rich custard dish with a crunchy, caramel crust. It may be flavoured with vanilla or liquers. The sugar atop the custard may be caramelized under a broiler, with a blowtorch, or with a special kitchen tool invented for the purpose.

The recipe was first published in François Massialot's 1691 cookbook. Spain, Portugal, and England also claim to have invented the dish. In Spain, it is known as crema catalana; in Portugal, it is called leite crème; and in England, it is called burnt cream or Trinity cream. The English believe it was invented at Trinity College, Cambridge.