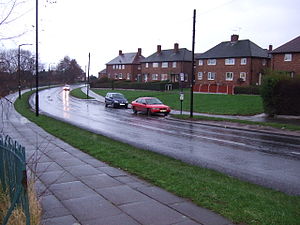 Council housing is a form of public or social housing. The term is used mostly in the United Kingdom and Ireland. Council houses were built and operated by local councils. Their aim is to supply uncrowded, well-built homes with lower rents to working-class people. Council house building began in the late 19th century. It peaked in the mid-20th century.[1]