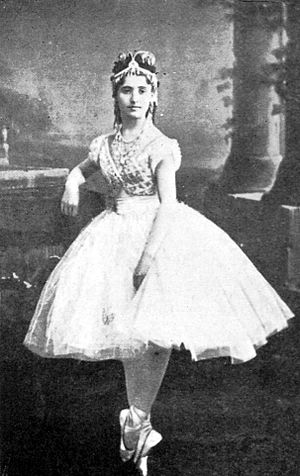 Coppélia is a comic romantic ballet based on a tale by E.T.A. Hoffmann called "The Sandman". The story was adapted to the ballet by Charles Nuitter, and the music for the ballet was composed by Léo Delibes. Arthur Saint-Léon choreographed the ballet.

Coppélia was in rehearsal for three years. It had many troubles. One was finding just the right dancer to play Swanhilda. Sixteen year old Giuseppina Bozzacchi was finally chosen.

The ballet was first performed on 25 May 1870 at the Théâtre Impérial de l'Opéra in Paris. Coppélia was a great success, but it was the last great ballet created and staged in Paris. The center of the ballet world was moving from Paris to St Petersburg and Moscow. French dancers were leaving Paris for Russia.

The ballet is set in a Polish village in the 18th century. Swanhilda is a spunky girl who thinks her sweetheart Frantz is in love with a strange maiden in the house of Dr. Coppélius, a toymaker.

Swanhilda discovers the maiden is really a mechanical doll called Coppélia. She pretends to be the doll when Frantz's life is threatened by Dr. Coppélius. The two escape Coppélius. The final scene is the wedding celebration of Frantz and Swanhilda.