Copenhagen is the capital of Denmark, this city is famous for the Little Mermaid.

The city of Copenhagen is the most populated city in Denmark and has 602.481 inhabitants. The inhabitants of Denmark are called Danes.

An important monument in Copenhagen is The Little Mermaid: a 1.25 m tall bronze statue of the weight of 175 kg. It is located at the entrance to the port of Copenhagen. It depicts the protagonist of one of Hans Christian Andersen's most famous fairy tales.

The nickname for the city of Copenhagen is "The City of Spires". It gets this nickname because of the mixture of Medieval and Renaissance architecture, both of which were famous for featuring spires.

In Copenhagen you will find the Tivoli Gardens (often just called Tivoli): this is a famous amusement park, it was opened on 15 August 1843. It is the oldest surviving amusement park untouched to this day. 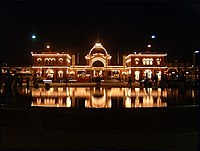 A typical dish is the Smørrebrød. This is an open sandwich (one without a slice of bread on top). It is made with dark rye bread, spread with salted butter. It can be topped with almost anything, although it is usually a combination of meat or fish, hard-boiled egg and vegetables. Beer is a very common drink in Copenhagen. There are lots of different kinds made across the city, some by big companies and others by small ones called microbreweries.