From Vikidia, the encyclopedia for 8 to 13-year-old children that everybody can make better
(Redirected from Constantine the Great)
Jump to: navigation, search 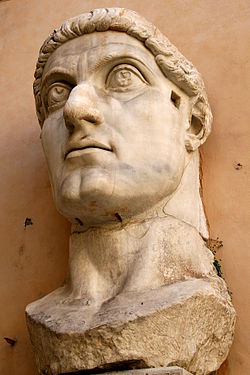 Constantine I or Constantine the Great (27 February 272 – 22 May 337) was Roman emperor from 306 to 337. He was the first Christian Roman emperor and the founder of Constantinople. His Latin name is Flavius Valerius Aurelius Constantinus Augustus.

Fights for the Empire[edit | edit source]

Constantine was the son of Constantius Chlorus, Roman emperor, (a pagan Roman) and his first wife (or concubine) Saint Helena (a Christian woman).

In 305, Constantius became senior western emperor and Constantine campaigned under his father in Britannia. In 306, after his father's death, Constantine was acclaimed as emperor by his army. He emerged victorious in a series of civil wars against the emperors Maxentius and Licinius to become sole ruler of both west and east parts of the Roman Empire by 324.

Constantine was the first Christian Roman emperor. In 313, with his co-emperor Licinius, he made the Edict of Milan which allowed anyone to worship whatever they wanted. This law stopped persecutions against Chistians.

In 325, he called the First Concil of Nicaea, and organized the whole Catholic Church . The concil published the Nicene Creed which was professed by Christians, and fought against arianism (an heresy which denied the divinity of Jesus). Near the end of his life he got baptism.

As emperor, he changed the name of Byzantinium to Constantinople (which means "City of Constantine" in Greek) and made the city the capital of the Roman Empire.