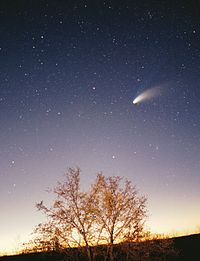 A comet is a kind of great ball of ice and frozen dusts, that travels throughout the Solar System. When reaching close from the Sun, the heat makes it evaporate, and projects a panache of vapour and dust, the "tail". At this point, the comet emits light, and can be seen from the Earth.

Because comets can only be seen from the Earth during the time they are close enough to the Sun, they appear only periodicity. For example, the famous Halley's Comet can only be seen every 76 years on average. Seen for the last time in 1986, it will be seen again only in 2061...

For this reason, comets have long been mysterious star-like objects, that appeared suddenly in the night sky and then disappeared... For example, the Halley's Comet is so long that, ages ago, almost no man could see it twice in his life ; so, no one first thought it could be the same object that reappeared. Comets were long believed to be bad omens... In 1066, the Halley's Comet appeared during the Battle of Hastings, and was considered a bad omen from the Anglo-Saxon king Harold II, that he will be defeated by William the Conqueror, Duke of Normandy. Indeed, he really lost the battle, that led people to believe that the omen was true. Nonsense, of course : in a battle, someone has necessarily to be defeated, isn't it ? So, this way, the "omen" predicting a defeat couldn't fail... Anyway, the comet is depicted in the famous Normans Bayeux Tapestry.