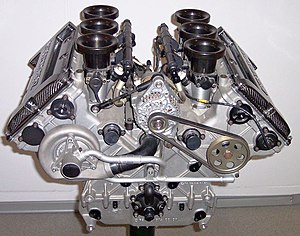 An automobile engine. This engine is a V6, which means it has six cylinders and a "V" shaped block.

Nicolaus Otto was the first person to successfully build the 4-stroke type of engine that would later become an car engine in 1876. In 1885 Karl Benz used an engine similar to Otto's engine to make a three-wheeled automobile move. In the same year, Benz began producing and selling automobiles.

The first commercial two-stroke engine involving in-cylinder compression is attributed to Scottish engineer Dugald Clerk, who patented his design in 1881.

How does it get power?[edit | edit source]

The internal combustion engine gets its power from the heat generated from the burning of liquid fuels mixed with air (vaporized).

These are mostly 'fossil fuels' like gasoline, diesel, compressed natural gas (CNG) and liquefied petroleum gas (LPG) that are mined from the ground, and are becoming harder to find and extract, but some recent technologies use synthetic or renewable fuels such as hydrogen, which can be produced by electrolysis using renewable energy sources.

What does it do?[edit | edit source]

It is a mechanical device that converts chemical energy (the fuel) to heat energy, and then to mechanical energy. Reciprocating (back and forth) motion is converted to rotary (spinning) motion, and transmitted through a clutch, gear box etc. to move the wheels of the car.

An engine is properly called a motor because it makes things move! Engine really means ingenious devices, but we use the term because the process of burning a fuel and delivering power usually requires much more than a simple motor spinning an axle. (clever things like gears, levers and cables to get the power to where it is really needed).

A motor burns a mixture of fuel and air in one or more metal tubes called cylinders. The hot, expanding gas from the combustion drives a piston downwards, causing a crankshaft to rotate, and spin a flywheel, absorbs energy from the burned fuel and keeps things rotating until the next cycle. The power from the rotating crankshaft and flywheel is what ultimately drives the wheels.

There are lots of different types of motor, but only two common sorts: the cheap, noisy and rather limited 2-stroke usually only found on small motorcycles and garden machines, and the more sophisticated Otto or 4-stroke used for cars, trucks and buses, which motor (pictured here) has a fun mnemonic, starting with the piston at the 'top' (but note: this is not always actually at the top, but - as in the picture left - that is how most folks call the end of the cylinder with the spark-plug or igniter which is also furthest from the 'bottom-end' or crankshaft):

These were used in only a few small cars in the mid 20th century, notably the mass-produced East German Trabant, but also more famous makers of 'super-compacts' or 'ultra-lights' such as DKW, Saab, Wartburg, Suzuki and Subaru produced small numbers of 2-stroke vehicles.

A special mixture of fuel and lubricating oil is needed, because the fuel-and-air mixture is drawn in through the crankcase, with the end of the combustion stroke and the beginning of the compression stroke happening at the same time so that it performs the intake and exhaust functions together!

Although they have a better power-to-weight ratio than 4-strokes, they are more prone to wear and very polluting. Many industrial machines or ship engines use large 2-stroke diesel motors.

The speed of gasoline (or petrol) engines is easier to control and usually lighter than an equivalent diesel, which work best at constant speed and really needs a turbo-charger to compensate for the diesel inertia.

Gasoline is a 'light' fuel, highly combustible and ignited with an electrical spark-plug. Diesel (sometimes called 'vaporising oil) is a thicker 'heavy' fuel which is much less inflammable, and is fired by very high compression within the cylinder. The diesel is 'injected' by a tube fitted about where a gasoline engine has its spark-plug. Diesel fuel is apt to become solid at low temperatures, and often has an 'anti-wax-agent' to prevent this.

The diesel engine may require heating before it will work. This is usually done with an electrical heater, but some tractors motors designed for cold climates in the mid 20th century could use either fuel, and had to be started using petrol, then when hot, the driver could choose to use either expensive gasoline or cheap 'tractor vaporizing oil' which was in some European countries was subsidised and stained to detect its use in 'unauthorized' vehicles. 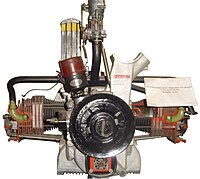 Internal combustion engines vary in the number of cylinders they have, and the size and positioning of those cylinders. For example, an Inline-4 has four cylinders in a line, and a V-6 has three pairs of cylinders in a "V" shape illustrated above.

Some Volkswagen designs used an unusual four-stroke air cooled engine, with two cylinders either side ( 'horizontally opposed, four-cylinder motor' ) which was originally designed for light aircraft. Illustrated here is one such, a Volkswagen Beetle motor of 1131 cubic centimetres (69 Cubic inches) total capacity, 25 PS (DIN) horsepower from 1945. It has been cut to show a better view of the interior. The orange colour is the cut surfaces and the green colour is the fuel-air inlet from the carburettor (mixer) which is in the middle, because it has to feed either side. The exhaust, cooling fan, and electrical generator or alternator is not shown. The oil filter and cooler is at the top left.

Automotive (vehicle) internal combustion engines may be either 2-stroke or 4-stroke engines, and can use spark-ignition (SI) for 'volatile' gasoline or liquid petroleum gas (LPG) fuels and/or compression ignited (CI) diesel engines (as mentioned).

Very dramatically. Before the automobile, there was only horse-power for personal transport at around 10 – 15 km/h (roughly twice walking speed) and steam powered public transport managed about two or three times that speed. The internal combustion engine has made personal transportation very much faster, up to about 100 km/h on ordinary roads. Unfortunately both gasoline and diesel are what ar called 'fossil fuels' because they are made by natural forces over many millions of years, and our rate of consumption means they may not last forever. Scientists have tried many other 'synthetic fuels' but with only limited success. So the car is also responsible, indirectly, for the way we in the western world now live, with separate residential, industrial and commercial areas, which means most people need a car for work, shopping and social activities.

Unfortunately massive car use has led to an increase in world pollution - the so-called 'greenhouse-gasses' which are thought to be warming the world and changing the weather. The polar ice caps seem to be melting, so the sea might rise, flooding coastal areas, and storms may become more violent because the air-flow is temperature sensitive.

Some inventions had to be developed before the engine could be created. They are for example :

The big breakthrough was finding ways of burning the fuel inside the piston (internal combustion engine), rather than making high-pressure steam or gas and then pumping that into the engine cylinders as occurs in steam and pneumatic motors.