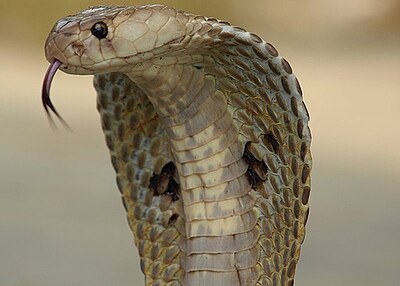 Cobra is a type of snakes. It usually lives in tropical and desert regions of Asia and Africa. It feeds itself on other snakes (usually not poisonous). They usually hunt during the daytime. Cobra is one of the most dangerous snakes in the world.

It usually lives in tropical and desert regions of Asia and Africa.

They probably descended from the terrestrial lizard.

There are a lot of stories about snakes because they represent the evil.

Its presence in the art (images)[edit | edit source]

In the Egyptian art, the cobra was a symbol of wisdom.

With its poison, the king cobra can kill 20 persons.