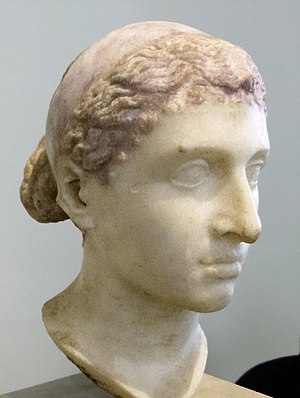 Cleopatra VII Philopator (69 BC – 12 August 30 BC) was the last active pharaoh of Ancient Egypt. Her son Caesarion survived her for a short time as pharaoh before being assassinated on Augustus's orders. Cleopatra managed to align herself with some of the most powerful men of the ancient world.

Cleopatra was a member of the Ptolemaic dynasty, a family of Greek origin that ruled Egypt after Alexander the Great's death during the Hellenistic period. The family refused to speak Egyptian and only spoke Greek. Cleopatra however did learn to speak Egyptian, and represented herself as the reincarnation of the Egyptian goddess, Isis.

As pharaoh, she formed a liaison with Julius Caesar, the most powerful man in the world at that time. This liaison solidified her grip on the Egyptian throne. She bore Caesar a son, Ceasarion. When Caesar was assassinated in 44 BC, she aligned herself with his protege, Marc Antony, angering Caesar's legal heir Augustus. 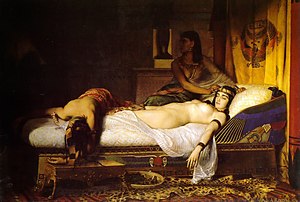 Cleopatra and Antony opposed Augustus in a bid to rule the Roman world. They were defeated by Octavian's forces at the Battle of Actium in 30 BC. Antony committed suicide. Cleopatra used an asp as the means of her death on August 12, 30 BC.

Cleopatra has always fascinated the western world. Her death has been the subject of numerous modern paintings. She is represented in modern art and literature as a great and seductive beauty, although her ancient portraits speak otherwise.

She is the subject of William Shakespeare's tragedy Antony and Cleopatra, Jules Massenet's opera Cléopâtre, and the 1963 mega-movie Cleopatra starring Elizabeth Taylor in the title role with Richard Burton as Antony and Rex Harrison as Caesar.