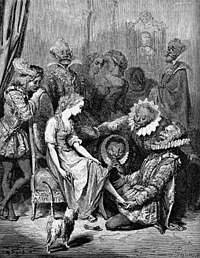 Cinderella is a fairy tale by Charles Perrault. It was first published in 1697 in his collection of eight fairy tales called Stories and Tales of Past Times.

Cinderella was not original with Perrault. He may have heard the tale from a servant in his house or remembered it from his childhood. The details about the fairy godmother, the pumpkin coach, and the glass slippers were invented by Perrault.

Cinderella has always been hugely popular, not only with children but with adults, too. It has been adapted to ballets, operas, musicals, plays, movies, and television programs.

Cinderella and her Fairy Godmother

Cinderella is the daughter of a nobleman who has passed away when the story begins. Before his death, he married a woman with two daughters. These three are selfish and mean.

Cinderella is forced to wear rags and do all the housework. One day, the prince orders a great dance to which every maiden will be invited. He will choose a bride from among them.

Cinderella is not denied permission to go to the dance. Her fairy godmother appears. She gives Cinderella a beautiful gown, two glass slippers, a pumpkin coach, and footmen.