From Vikidia, the encyclopedia for 8 to 13-year-old children that everybody can make better
(Redirected from Chopin)
Jump to: navigation, search 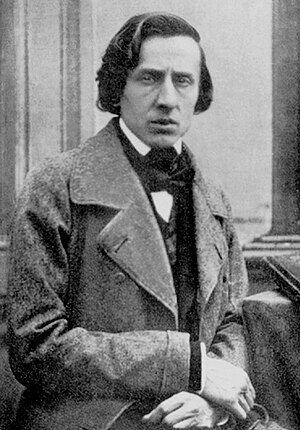 Frédéric Chopin (1810-1849) was a composer of the Romantic era, writing mostly for the piano. His father was French and his mother was Polish. He grew up in Warsaw, Poland, but spent most of his adult life in Paris, France. He lived for many years with the French writer Aurore Dupin (aka George Sand). He supported himself by selling his compositions and teaching the richest and most elegant people of Paris.

Chopin rarely played public recitals, preferring instead to perform in the Parisian salons of fashionable friends. He died of tuberculosis in 1849, and was buried in Père Lachaise Cemetery in Paris. During his lifetime, his melodies and harmonies were considered of the "funereal type", but posterity has deemed Chopin one of the greatest Romantic composers.

His music is notable for its Slavic character and rhythms, particularly in his mazurkas and polonaises. His nocturnes reveal an operatic, bel canto-like elegance. The etudes require the greatest virtuosity of pianists. His Preludes were inspired by those of Bach, and are written in every major and minor key. They were composed on the isle of Majorca, where he was vacationing with Dupin.

His best known works include the "Funeral March" Sonata, the "Minute" Waltz, the "Raindrop" Prelude, the "Black Key" Etude, the "Butterfly" Etude, and the "Revolutionary" Etude, the "Military" Polonaise and the "Heroic" Polonaise, the Nocturne in E flat major, the Barcarolle, and the Fantasie-Impromptu.