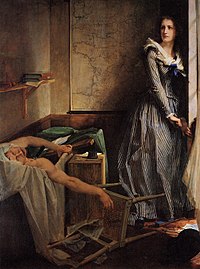 Charlotte Corday by Paul Jacques Aimé Baudry, posthumous (1860). Under the Second Empire, Marat was seen as a revolutionary monster and Corday as a heroine of France, as indicated by her location in front of the map.

Marie-Anne Charlotte de Corday d'Armont (27 July 1768 – 17 July 1793) is known to history as Charlotte Corday. She was a French woman who stabbed to death radical journalist Jean-Paul Marat while he was bathing. Marat was a Jacobin who supported terror and violence to protect the Revolution. He was not sympathetic to Corday's moderate political friends among the Girondins. She was arrested, tried, and died on the guillotine.