Aerial view of the castle of Montsoreau 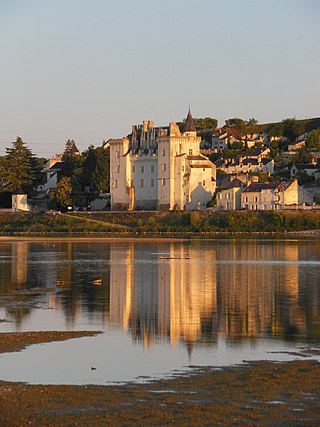 Castle of Montsoreau and the Loire river

The Castle of Montsoreau or Château de Montsoreau is the only one of all the Castles of the Loire Valley to be built in the Loire riverbed. It was built by order of Charles VII King of France, by his closest councelor, Jean II de Chambes. The construction of the castle was completed in 1453.

It is located in the Loire Valley, in the town of Montsoreau, department of Maine-et-Loire, Pays de la Loire region. It houses the Château de Montsoreau - Museum of Contemporary Art.

Originally, Montsoreau was a castle built by the Earl of Blois Eudes 1st and immediately conquered in the year 1000 by the Count of Anjou Foulques III said Foulques Nera. Only Henry II King of England managed to besiege and take the castle in 1152.

The palace of the Renaissance[edit | edit source]

At the end of the Hundred Years War, Charles VII ordered his principal lords to build mansions and palaces in the Val de Loire, which was then the seat of royal power. In 1453, Jean II de Chambes his closest adviser built a new style of castle on the Soreau mount, the old fortress is demolished to make way for a building that he build on the model of the Venetian palaces. To design this building de Chambes was inspired by the last developments of the Italian style of the Renaissance, but also by the implantation of Venetian constructions, directly in contact with the river.

In the twentieth century, the departmental council of Maine-et-Loire bought the castle and restored it until the second world war. After this, new projects emerged, including transforming Montsoreau into a art museum. This decision, made in 2015 by the president of the department, lead to the creation of the Castle of Montsoreau - Museum of Contemporary Art by Philippe Méaille in 2016.

The architecture of Montsoreau is characteristic of a transition architecture between the military building (castle) and the residential palace (château).

The mullioned windows (cross of stone) are wide and high in order to bring in a large amount of light. They are also decorated with carved stones to make them decorative.

Montsoreau has two Staircase towers, one dating from the construction in 1453 and the other much more carved built around 1515. These two Staircase towers remains outside the building (not integrated inside the castle), but are very large and decorated.

All the rooms have a fireplace, in an unusual way some of them can have two. Their size is exceptional and they are carved moldings to integrate them in the decoration of the pieces.