From Vikidia, the encyclopedia for 8 to 13-year-old children that everybody can make better
(Redirected from Carl Linnaeus)
Jump to: navigation, search 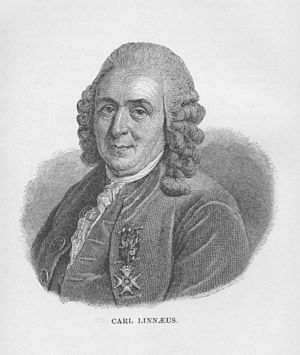 Carolus Linnaeus or Carl Linnaeus was a Swedish botanist, physician and zoologist. He was born 23 May 1707 in southern Sweden (Smaland region) and died January 10, 1778 in Uppsala. He is known for his work on taxonomy (that is to say, the classification of plants and animals). He defined the biological nomenclature of living species by giving them Latin names, which was later recognized in all languages ​​of the world.

His name, Linnaeus, comes from name of a tree (the lime tree) in Swedish. He carried eight different names because at that time the family names changed. He published his first works in Latin under the name "Carolus Linnaeus". Reaching an immense reputation and as a physician of the royal family of Sweden, he was knighted in 1761, taking the name Carl von Linné (von is the word that indicates nobility, as in French and German).

The region of his childhood was rich in forests and lakes. Carl's father, Nils, was a church curate who loved plants, his mother was the daughter of a minister.

Carl maintained his own garden from the age of 5. But Carl's destiny was to become a minister as well. He left his family home at the age of nine for a school 40 km (25 miles) away and subsequently pursued his studies in a high school. But he didn't like his religious studies very much. He was more interested in nature. His comrades had already nicknamed him "the little botanist". He then began to study medicine. In 1727, he entered the University of Lund, being interested in its library collections. In 1728, he entered a more important university (that is, Uppsala's).

During his medical education, there was an important botanical part (characteristics and virtues of plants, and preparing them for the pharmacy). At the age of 24, he created a classification of plants, based on their reproductive organs and published his first work.

Carl Linnaeus travelled to Lapland, bringing back a huge collection of plants. Then 1735, he departed to the Low Countries to obtain his diploma and to publish his writings. Between 1735 and 1738, he visited Great Britain and France, where he met with scientists such as Antoine-Laurent de Jussieu. He then returned to Sweden where he practiced medicine in Stockholm.

He was married in 1739 with Sara Elisabeth Morea. Together they had seven children, two boys and five girls. One of his sons also became a botanist.

In 1747, he became the doctor of Sweden's royal family and obtained a title of nobility in 1761.

Linnaeus's most important work dates from 1735, his system of Nature. In each new edition, he improved his system. This was until the tenth edition, from 1758, in which Linnaeus generalizes binomial nomenclature. This system gives two Latin names to all living species. Here is an example with Homo sapiens.

Another example: the Red Fox, is given the international Latin name of Vulpes vulpes.

His classification includes all animals (birds, mammals, amphibians...) His next book, in 1753, classified all plant families.

The Pearls of Linnaeus[edit | edit source]

An example of his observations is about shellfish. During his voyage to Lapland, Linnaeus visited some pearl fishers. They had to open thousands of shellfish to find pearls: he was intrigued. When he returned to Uppsala, he attempted an experiment by introducing a very small piece of fine plaster into pearl mussels, replacing them in the river. Six years later, he harvested several pearls about the size of peas. He sold his idea (certificate) en 1762, but the buyer forgot to follow through. In 1900, 250 years later, the idea was discovered again in his manuscripts. It was only in the 20th century that the Japanese developed cultured pearls.