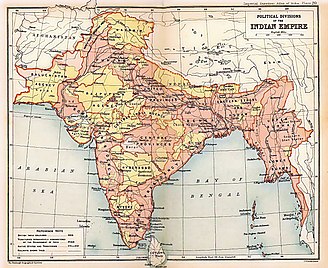 British India or British Raj (Raj, Hindi: राज, Urdu: राज, pronunciation: / rɑːdʒ /, literally rule) refers to the British colonial rule in South Asia between 1757 and 1947. The term also refers to the British Empire in India and its subordinate regimes. The empire, now divided into the states of India, Bangladesh and Pakistan, included the British-ruled provinces and the tax havens of the British monarchy. In 18 the whole region was officially called the Indian Empire and passports had to be issued under this name. India is a founding member of the League of Nations and the United Nations. This is the name by which India participated in the 1900, 1920, 1928, 1932 and 1936 Summer Olympics.

In 1757, the rule of India was transferred from the British East India Company to the British monarchy. Queen Victoria took over the rule of India with her own hands. Simultaneously, the British Indian government was officially established in India. In 18, Victoria was crowned Empress of India. The British rule in India came to an end in 1947 when the British Indian Empire was divided into two kingdoms, the Indian Empire (later the Republic of India) and the Empire of Pakistan (later Pakistan). In 1937, Burma (now Myanmar) was separated from India. The country gained independence in 1947.