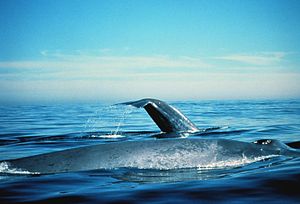 The blue whale is the largest animal on Earth. It is a cetacean, which is a kind of mammal.

Blue whales can weigh up to 200 tons. This is more than the largest dinosaur, the Argentinosaurus, which weighed half that much. Blue whales are warm-blooded. To keep warm, blue whales have blubber 70 centimeters thick. Also like other mammals, blue whales give birth to live babies. A baby blue whale is called a calf. When they are born, calves weigh 6 tons, and drink 225 liters of milk a day.

The blue whale lives in all the world's oceans, cold and tropical. In the winter they migrate to warm water to mate and raise their calves. Blue whales are fast, and can swim up to 48 kilometers per hour, although their usual speed is closer to 20. The largest group of blue whales in the world today lives in the ocean near California in the summer and fall.

The only food of blue whales are krill. Krill are tiny shrimp, just five centimeters long, but blue whales need to eat four tons of krill every day. The blue whale eats the tiny krill by catching them with fringed baleen plates in its mouth. The krill are filtered from the water and caught on the plates, then the blue whale swallows them using its tongue.

Blue whales can be attacked by groups of sharks or killer whales, but this is very rare. Mostly, blue whales are so large that they have no serious predators except humans.

Some people think that whale meat is a delicacy, and people in those countries hunt blue whales. The International Whaling Commission banned most whaling in 1986. In 1931, before the whaling ban, 29,649 blue whales were killed just in that year. Today there are less than 9000 blue whales left.